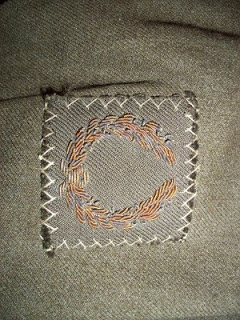 My father, Randall Beryl Wind was a gentle man.  One of my favorite stories is how he once tried to put a young blue jay back into its nest -- the parent kept diving at him out of fear he was going to hurt the little bird.  My dad, undaunted, went into the house, put a pan on his head and proceeded to put the bird back into the nest.  That was who he was...a gentle man.

I thought of him this past February when I had a chance to visit the WWII Memorial in Washington D.C.  He had served in the Asia-Pacific Theatre -- an airplane mechanic.  His uniforms had been lost upon his return -- but not his memories or the stories he told us of this time in his life.   We were all captivated by the paintings on the airplanes and the names and the pictures of this young man when he served in the Jolly Rodgers.

My dad has been gone for 14 years this month...but so much of him creates who I am .  And though I am a pacifist at heart -- in me is the courage to defend what is mine...and to honor what he & others like him gave...their youth, often their lives, for an honorable cause.

So, this past Sunday,  Bill L., a gentle man I have gotten to know at the Hixton Antique Mall arrived with a gift for me.  Wrapped up in a bag was his Eisenhower Jacket from WWII.  He had served in the Asia-Pacific Theatre -- a Technician.  He wanted me to have it.  For once, I am without words... 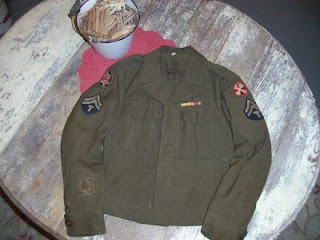 very touching!
there are such great people out in this world... we only hear of the bad ones.. thanks for sharing

Holy mackerel, I've got tears in my eyes as I read this. What a wonderful story about your father and his commitment to our country! What a super surprise to receive the package from your friend.