Two journeys came together this past year, with lessons not lost on myself. 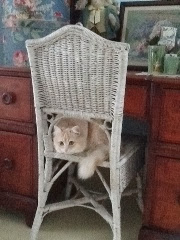 My sweet August Rose was hit by a car in May...
she dragged herself to the safety of the old outhouse in our apple orchard
- a shattered pelvis, an open leg wound.  All we could do
according to the Vet., was keep her contained in a cat carrier
for almost two months and let her heal herself.
She did, miraculously, she did.
In so doing, this dear little one showed me such courage.
She officially became a house cat in July.

That July, I was diagnosed with breast cancer.
I felt that my very being had been shattered,
and I wanted to crawl away, into retreat.
But each day I was greeted by this little one,
this little girl kitten that never gave up.
Her presence often guided me.
Her recovery provided inspiration.
If such a little one could do this without complaint, so could I. 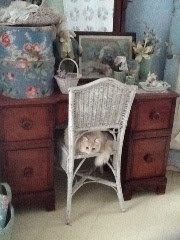 We never know how courage will find us.
Sometimes it arrives in unexpected ways. 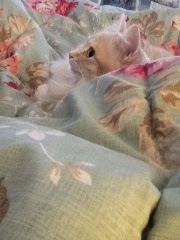 There is so much wisdom and encouragement in the eyes of those wonderful souls. She certainly came to you for a reason......she was broken, yet she came knowing you would need her strength later. Such blessings.!

Oh my, tears of joy for both of you, never give up the fight my friend.....Such a sweet little face, animals definitely are healers, Big Hugs Francine.

Kari, That is an awesome way to look at mishap! Thinking of you,
Lisa

There are angels among us.

Who would have known? So happy you two had each other through the rough times. Unconditional love is one of the best riches. xo

Amazing how animals are able to pull us thru some pretty difficult times.. Be brave my friend... better times are coming..

Robin at The Primitive Hutch said...

Never give up the fight my friend.
There's a reason your paths have crossed.
Blessings
Robin

Pets enrich our lives in many ways. Bless you both - you were meant to be together. She is such a little beauty.

This is lovely, Kari...you are a brave one, too! It is always special what our pets bring into our lives!