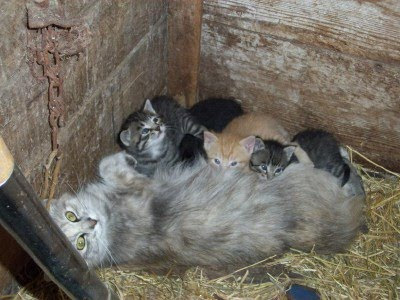 Last November our twin goats, Ralphie & Charlie, arrived at the farm.  We had adopted them from a neighboring farm in Eleva.  After a day of acclimating to the older goats, we left them for the night.  As we turned off the barn lights, a meowing began.  Dave & I searched until we found this little cat wedged in fear between the milk house and the pasture.  She wouldn't let us near.  So, not only were we leaving the twins to fend for themselves for the first time that night -- but we were also leaving a small frightened kitten that had found her way to our farm.

The next morning we opened the barn door to find not only Ralphie & Charlie asleep in the hay -- but there was the little cat.  We called her "Hope".  She remained all winter with the goat family in the barn....they kept her warm.  It took us over 2 months to gain her trust.

Today, she calls the barn home-- and we are certain she believes she is a goat.  And, how surprised we were when she presented us with this present tucked under the stair case...4 little kittens.    From the left in the picture is Chippewa, Shadow (tucked down), Pumpkin and Whisper.

Kari--
Thank you for sharing your farm with the world. It's like watching a good book unfold--day-by-day!
I hope you had a great birthday and Little Moo fairs well. (I promise not to spook him anymore!!)
Love,
Sarah

The Vet came out today -- looked at all the kittens -- they are purr-fect. Three boys & one girl.

Moo got a shave, a bath & a shot & spray down of antibiotic!

Shawnee got some help from a bit of an infection.

Life on a farm -- country vet coming right to our door!
Kari

Kitty update:
I am beginning to take the kitties out each evening -- Hope and I have made a trusting agreement to help each other on this....not sure how one mom can keep track of four roaming kittens otherwise.
Kari

Oh babies! I have 6 sets of paws running through my house(pet doors!!). Thank goodness I don't have a barn...who knows how many there would be. Nothing sweeter than a baby kitten.