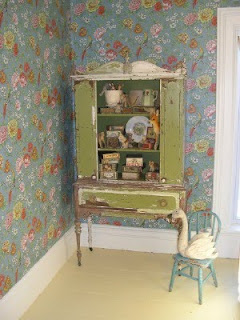 I am not the best at auctions...Dave & I have been known to be on opposite sides of the room bidding against each other.   And, if I want something, I will generally hold my number up, set my chin and take it to the end....no matter what the cost.

So, several years ago I was at an auction when I eyed this sweet cupboard.  Kind of a funky green, very chippy, charming details ---- just sweet.  Figured it would be an "it is mine" moment and I decided what price I would take it to, which likely was going to be a set my stance and take it to the end  & win, of course.

So, it came up on the auction block -- a point was made to the back of the room where it stood and the bidding started and ended with my $5.00.  Folks looked a little sad for me that I had won it -- so now I wondered if I had actually won the old worn 70's couch sitting in front of it.  Oh my, would have to just sneak out.  In a rather careful manner, I made my way back to see what I had really just bought for $5.00....and there was my bidding number on the sweet cupboard.  It was mine.  It was mine.  It was mine.

I need to be brave enough to bid on my own, too many times my husband has missed the nudge to his foot, ribs or even the outright "bid on that" signal I am giving.

Bidding is exciting...you just have to set a price and stay with the cadence of the bidding. I can't tell you how many times I have actually gone to pay and found my final bid actually lower than I thought...that is a good thing!
Kari

What a beauty! I love her!

Hi Sue...isn't she sweet -- I just love her too. She holds my collage supplies stored in cigar boxes. She is taller than she looks -- we have very high ceilings.
Kari