The bear went over the mountain... 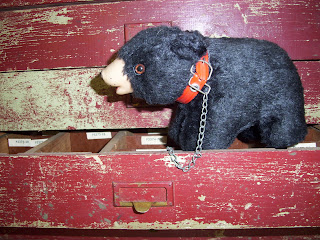 With the mild winter, the bear has been awake & rooting about.  With the lack of snow, it has also been crossing the road to drink from the creek across the way.  Rodney has seen it three times in December.

So, I think, what do I do if my path should cross with a big old bear.  Even though the facts note that black bear generally are people shy ---- the facts also state that one should climb a tree - a tall tree.  It also states to not try to out run a bear -- as they are faster than they appear.

So, if anyone should happen by the farm and see a Kari on the roof of the barn -- do not question how I got there -- just know why I got there!﻿

It is rare to see a bear! I saw one making it's way across a field this summer :-}

Not easy to climb a tree. I think just stand still and walk very slowly backward.. maybe..pick up a nice heavy rock to wack it in the nose. Bears have very sensitive noses.

Kari, carry some pepper spray. We had a bear in my neighborhood a couple of years ago (and I live right in town!) and I carried pepper spray when I walked the dogs in the morning. Now, I know that I would have expired from cardiac arrest if I would have been close enough to actually spray it, but it gave me some peace of mind.

Knowing you, dear friend, that bear will be named and fed well at Meadowview Farm! I imagine 2 goats and bear curled up in the barn :)

Do you think I could train the big guy to carry an umbrella & ride a unicycle?
Kari

Kari on the roof and a big ole bear lumbering below! I love it! Call me and I'll come and sell tickets. That would be quite a show!
Jani

Kari,
I would like to know about the red painted cabinet in your photograph...it looks really nice:)
Might I see it at your Barn Sale in May???
Do be careful with a black bear in the area...but enjoy the wonders of Life on an 1857 Farm in Wisconsin.
Fondly,
Jeannine