it was only a matter of time

The look on Dave's face was pretty priceless when I pulled into the farm Friday. "Can you believe it?" or something similar came out of his mouth. That was followed with, "did you get my message?" As I ended my work day out of the office, and since the message appeared to have been left on my work phone........no, wasn't quite sure what was up.

So here is the story:

Dave was mowing the front yard around 1:00. He noticed a vehicle pull over near our little orchard. Likely Dave figured they were admiring his mowing prowess, so on he drove on the rider. The vehicle sped ahead, nearer Dave.....they stopped, so he stopped, awaiting the obvious compliments that would come. Window down, head out of window, they yelled, "There's a bear in your back yard!"

Dave heads around the house.....on foot, to come within 30 feet of a pretty large black bear preparing to climb onto our deck. Dave sees bear. Bear sees Dave. Both likely screamed (I added that) and bear took off through our meadow, through the field, across the road, past the car that had been watching the whole thing......and up into the hills across from our farm.

It was only a matter of time until we had a visit by a bear
-----our distinct hope is that it will be the first and the last. 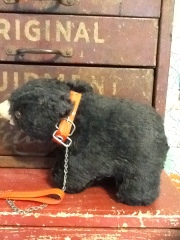 P.S. cannot wait to hear that message on my office phone....seems hyperventilating may also come across loud & clear!