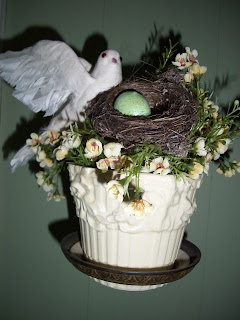 I've been thinking a bit about this word lately...wondering if in the end, the only way we ever ever have "win win" is with compromise.  We each do the "give & take dance of life" -- standing firm sometimes, bending with the wind sometimes, ﻿saying "sure" sometimes.  It is really what we do - right?
My two male unfixed tom cats - brothers mind you, have had a little debacle over who is the king of this farm.  Don't let their sweet names (Marmalade & Cinnamon) or their sweet disposition when in my arms fool you -- this was a battle.  In the end, they both decided that they could both rule -- taking turns by day -- with Marmalade as King of Meadowview Farm and Cinnamon as Prince -- not Co-King, but maybe CEO -- which was fine with Cinnamon.  They both just wanted rights to the food & milk & the love of two would-be farmers and worked it out.  They compromised.
Dave & I will celebrate 30 years of marriage this October -- funny how this happened when he is still 13 at heart and I am in my 30s (wink wink) -- but it happened.  Our dance has been the dance of compromise.  We still own our own opinions -- but have become a better union when we work together.  Tree falls on our lives, we move it limb by limb out of the way together.  Road becomes rough, we fill the potholes with gravel side by side together, wheelbarrow by wheelbarrow.  When his knee gives out, I carry the load.   When my heart is too full, he carries me.
As an early childhood educator my mantra is "play well in the sandbox"....
If you want that truck right now, I could:
a. smack you in the head with a shovel & grab it
b. scream or cry to get my way (called a tantrum)
c. work it out -- maybe with the teacher's help -- but after all these kiddos are little
Hmmm -- if 3 year olds can compromise & cooperate -- wonder why it is so difficult at times for adults to do the same?
So anyway -- been thinking about compromise just a bit lately.
Seems that if two tom cats can figure it out -- we adults can do so too.
Just thinking....