To start, we are all O.K. -- that is always a good start & a good end to a story.  On Sunday afternoon, a tornado made a path along Highway R in Augusta -- our farm was along that path.  I had been working in the hayloft all day -- readying for the May Barn Sale...multiple times the radio had announced a series of severe storms heading our way.  Dave was at work - but we had been checking in fairly regularly regarding the weather.  The dark skies to the north finally hurried me into the house -- closing up the barn, tucking everything in and wishing for the best....sounded like it would miss us.  Some time around supper, Dave called to say that there was a tornado near Foster heading toward Augusta - I best get the cats & head to the basement.  As I was calling for the cats and trying to find my phone -- I could hear the sound of a train outside -- if you have ever heard this, you know that ominous noise.  I climbed into the bathtub - not knowing if I would make it to the basement (growing up in a basement less house in Monona -- the bathtub was where our mom would tuck us away to be safe in a storm).  When I finally made it to the basement, I could hear the south side of the house just getting slammed.  After the winds stopped, I climbed the stairs with solemn trepidation -- what would I find?  Indeed, we had been in the path of a tornado --- at least 5 trees will need to come down, lots of repair to outbuildings & the barn, our patio set was carried off to the neighboring field.......but, we were all O.K.  The house had once again stood up against the winds.  The barn was still standing (and the hayloft & all the Barn Sale goodies untouched--the kittens had hunkered down up there).  The goats had ridden out the winds in their cabin (as the lower level of the barn was whirl winded).  Ralphie's bridge was now stuck on a fence -- as was most of their hay...which they found to be an awesome way to eat.  The large cupola I noted in my last post was way out in the adjacent field.  But we were all O.K.  I called to let Dave know we were fine -- but that there was indeed a tad bit of work to be done, we will be at it for a while.  The neighbors came to offer help -- they shared how they watched this fume of wind carrying stuff across the field.    Everyone was hit, barns were flattened, electricity out until the wee hours, trees - beautiful trees twisted.  Tornado, without mercy -- and yet what you spared we are thankful for.   We are all O.K. 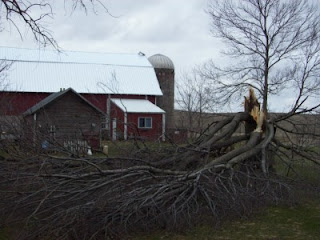 Addendum:
My big sister, Randi, provided me with some data this afternoon -
the F1 tornado that hit us traveled a path of 1.5 miles at speeds up to 105 mph.
I realized today why I was insistent on having my phone in the basement...if this big old house fell,
I was going to be under lots of bricks & mortar & plaster.  But she didn't.  105 mph winds knocked her again & again and she stood.  I don't think I was afraid because I felt safe...folded in her arms, safe.
Today I am a bit shook by the thought of it all -- cross that off my bucket list -- I survived a tornado.

So thankful that all of you are safe. That roar is something you never forget if you have lived though it--1985 for us. We can rebuild but the loss of all the trees was so sad for me....the help of neighbors is something we rural communities know of...take care. Who knows what treasures you might find that the wind blew in!

Thanks so much for the update. I'm glad you and all your critters made it through the storm. I, too, have heard that sound living in Iowa. Don't care to hear it again. I feel better this morning knowing you are all ok.

Meadowview has plans to stand for another 150 years!

So glad to hear you are safe! The trusty old lady stood up to yet another storm! Sad to see that you lost the tree; did it hit the orchard? Safe clean up! Rusty nails abound! <3

The electricity came back on at midnight -- even though a well means our water is ours -- it requires electricity to pump it....so no lights, no water, no plumbing.

Had a chance to drive down Cnty. Rd. R on the way to work this morning -- many farms were terribly hard hit.

These are strong forces -- winds are winds, no control.

Thanks for all your kind words.
Kari

Kari, I am so thankful you are all ok..... Will be thinking of you. Hugs my blogger friend..

Kari so glad that everyone is safe.
We were also lucky here just north of Marshfield. One storm went just to the south and one to the north of us. As the saying goes, they don't build them like they used to. Glad your lovely homestead is a "used to". May it stand for many more years.

I was thinking of you guys on Sunday when I heard there were warnings near Augusta, glad you are all SAFE and that the house + barn remain safe as well.
I grew up in Southern Iowa-for 15 years and that is a chilling sound-unlike anything, and something no one will understand until they have experienced it themselves.
What a grand old house {& God!) for keeping YOU safe!!! :)

Just about one year later, Dave was featured on WEAU news on March 2 sharing our story as part of Tornado Awareness.
Kari