some stories find us 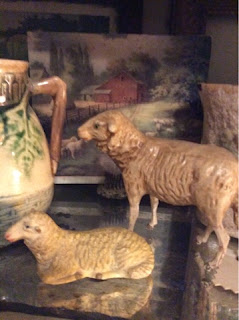 There. Right at the edge of the trees. Five sheep - in the snow, close to this abandoned barn. I slow and watch for them along HH in Otter Creek, mulling over their story...checking on them. They make me ponder & wonder.  Purposely, I do not disturb their quiet grazing, nor does the farmer that leaves them water.

I am not sure what story pulls at my heart more.  This barn without a house, left in the woods, orphaned.  Alone.  It looks to have once been part of something grand, a busy place where kids & animals were raised.  Now it stands bewildered by time, lost.

And this small flock of sheep that have found their own farm on their own journey, homeward.   Twice sold, trailered several miles away to a new pasture.  Twice they broke the fence, traveling back to what they knew.  Now they are not accepted at their old home or welcomed back to their new one.  They have found a fenceless pasture, a lone barn.  They have made their own home somewhere in between.

A flock became a family.  A barn became a home.  Lost became found.
These are the stories that find me along these country roads.

Sorry, I should leave a comment as poignant as this story...but Ralphie says they should come live at your house.