At 2 pounds, 2 months the new kittens are getting bigger. Last week marked their first trip to the vet. Today marked the first evening when I saw all three playing in the straw outside the barn. And I assume that Sunday, Meadow might have one upped fate....finding his way into the tall grass along side the pasture. Good thing he knows his name AND has me wrapped around a little paw....cause I searched until I could lift him out to the security of the barn. I am certain that they will rescue themselves 100 times over, but it did make me feel just a tad heroic....and I will take that however I get it.

The vet believes we have 2 girls & a boy....but I am told that they won't commit to that until the July appointment-- who knew it could take so long for a definitive gender answer. If Meadow remains a boy....he will be adopted by my Ian. Only one tommy can settle into a farm without upsetting the universe...and Cinnamon has won that right (for goodness sake, he lived in a hollow log when his brother, Marmalade, was king). The girls, Pearl & Luna, will stay on the farm to keep me company.

Here's my little Luna waking as I arrived home today. They do fill my heart, they do....and who could ask for more. 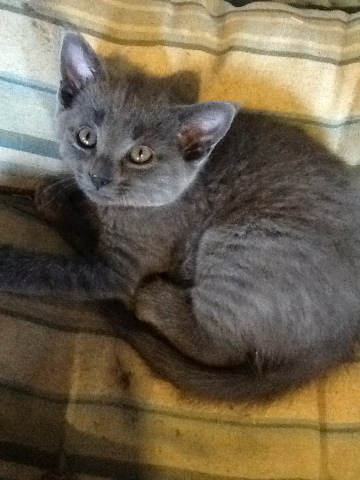 I do love a grey kittie! I have been hoping you would share some pictures.

New kittens are a delight! What a fun time for you. Thanks for your visit!