I try not to read too much into the animal adventures on our little old farm...but every now and again, stories unfold that make me wonder.

So, here it is....our first barn cat arrived as a stow-away on a truck full of goats in 2008.  We named her Hope.  It took over 2 months to build trust with her...and she eventually gifted us with three litters of kittens.  She would often wander off to neighboring farms, several days away would not alarm us.  Last year at this time, she left for a week - but returned.  However, this year -- she has been gone since the end of February -- with sightings at the neighbor's farm.  Seems she may have moved on.  So, Hope moved on. 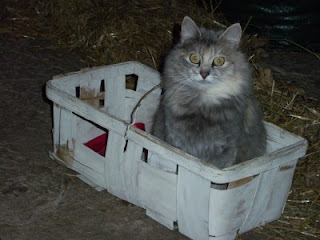 Now here is where the mystery of life unfolds -- in her stead, we began sensing another cat in our barn.  And we soon found a black & white fluffy cat -- somewhat rough around the edges -- appeared to have traveled to get here.  Whisper & Chestnut show no fear or trepidation about this new friend, and we now find this cat in the barn, eating, sleeping, taking this as a new home.  He is slow to trust us as Hope was....but is learning not to run.   We have named him Faith.

Faith no doubt hails from Florida, where he met a batch of robins that said your farm is the happenin' place. He's got some miles on him.

It is that time of year at our home too....new faces at the feeding bowl...our latest is a tame one though...beautiful little boy.

I love your outlook on Faith and Hope! We live slightly in the country and have had lots of strays (both cats and dogs) show up at our door through out the years. Right now, I have a little cat named Spooky (yellow and black coloring) that came to us as a kitten last Spring and is now part of our family. We also had our male cat, Tiger Boy disappear that same year. I understand.
Betsy

Cheryl, you do make me smile! Kimmykats & Betsy...you do know what this is all about too. I do miss my little Hope cat...and her son, Cinnamon, who is gone too. And this new cat really has been on his own...tale full of burrs, lonely.....he follows behind Whisper & Chestnut. We shall see how this goes....gonna require some faith.
Kari

Arrived home tonight, and who should I find waiting on a bench near the milk house?....why Hope of course. So now Faith exits and Hope returns. Three weeks without our girl...and then there she is. Must admit, I'm elated-- wasn't
quite the same without her. Wonder if Faith will return?
Life on a farm...

LoVe your "Cat Tales"...
Just sweet... Thanks for sharing...
AND I'll be stopping in HIXTON - THIS THURSDAY!!! I'LL EMAIL YOU...
Jeanine Burkhardt

Have learned that Faith & Hope can coexist...but Faith desperately needs some TLC. Tonight he let me rub his head and he purred so ... Believe he was domestic and abandoned...his fur is matted very badly. Makes me mad that people do this to animals. We will attempt to get him to a Humane Society for care & adoption...he really appears to be a sweet boy. Our favorite Humane Society has limited hours ... Hard to work out a way to get him there when he comes & goes so much. I won't do wrong by him. The lessons that these cats teach me...
Kari