I sit in the quiet of this home, built brick by brick...square nail by square nail in 1857.  I feel this abundant awe living in the midst of history and recognizing those who stood here before me.  Knowing that Augusta became a town in 1857 and that the Civil War was yet to be when this house was built is humbling.  Thank you Joseph Strader for coming here from New York to build this "magnificent brick house" 160 years ago. 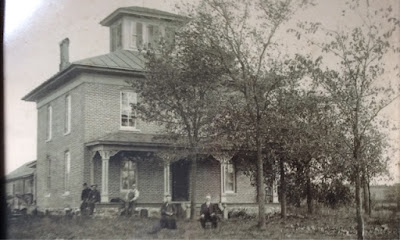 The following excerpts are from "The History of Augusta" written in 1874.

Buildings, fruit trees, fences, improvements and everything, denote order, industry, and economy. ... Joseph Strader with his magnificent brick house, Fletcher Dighton, S. E. Cooledge, I. G. Bills, William Arries, James Surgeon, Lindsey Wright, F. A. and S. H. Denison. Peter O’Blair, and scores more, all model men, now well-to-do, though they were all poor but a few years ago when they came to the valley. Nothing short of good markets, health, good habits and rich soil can produce such results in so short a time. This is a truthful picture of this beautiful valley, and it is by such men that we are surrounded, as neighbors and friends; intelligence and true friendship are embodied in such a class of men.

Up to 1861, the local advantages were about all our citizens took any special interest in. but when the news came that Sumpter [Fort Sumter in the American Civil War] had been fired upon, the people of this valley, in common with those of the surrounding country, felt the insult as though it had been specially aimed at them and from the first three months until the final surrender the valley had its full show of representatives in the deadly strife [of the American Civil War]. During all those years of weeping and mourning, we had in the Union army a large list of our best citizens, many of who never returned to their families and friends. Some of them do not even share the honor of our decoration day, but are buried in the shade of the Rocky Mountains or in the sunny south, where their dearest friends may never find their graves.


May their memories be for a blessing.  Happy Birthday Meadowview Farm! May you always be a home to compassion, hard work and the democratic spirit.