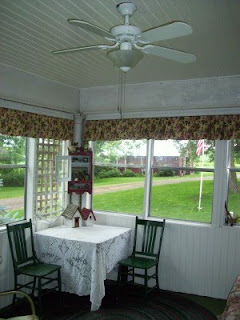 Remember the show, Trading Spaces -- one of the first decorating shows to draw in a fan base --- I mean viewers NOT ceiling fans.  They ripped out ceiling fans quicker than they could throw paint on a wall.  I always shuttered for the poor home owners that would tag their fan as "off limits", only to find it gone on the great reveal.

So when we bought the farm in 2006 --- I almost felt we were breaking a decorating taboo to install not just one ceiling fan -- but SEVEN ceiling fans!  I finally had the high ceilings to support these beauties.....not to mention no air conditioning.  These guys were essential!  And they were a first for me!

So, now Summer means Ceiling Fans!  And, we ADORE them...absolutely, positively.  "Do not take down my ceiling fans -- Or Else!" reads my 7 notes! 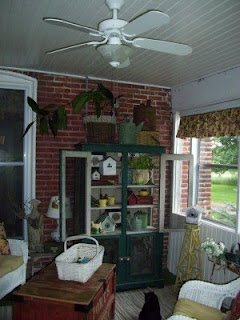 What is a porch without a gentle breeze? 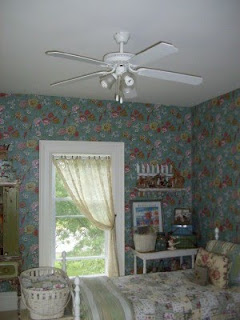 And, I love love love the swirly energy efficient bulbs sneaking out from the end of a sweet fan shade.
Adds a touch of modern to charming.
So -- would you let Paige & Company tear out your ceiling fans?
Who even remembers Paige & Company of Trading Spaces fame?

Kari,
We have a fan in every room in the house and they help make the a/c more efficient when we need it and less necessary. And they lull the Littles to sleep at nap time.
I always thought I'd be the one who turned away crying after the big reveal on that show. Scared me silly!
Jani

Ceiling fans have a specific purpose, they're not just aesthetic, so I also would grumble at any decorating show that would yank them out. I remember Paige - and the episode I recall most clearly is when designer Doug painted an enormous and heinous FOOT on the wall of a woman with a foot phobia. What was the purpose of that?!
I just installed a ceiling fan in my garage this spring...due to a small house my garage gets used as a "rec room" during the summer.
Great rooms here - you have quite an eye for using just the right amount of things.

We made the decision to purchase the farm within a 20 minute initial walk-thru of the house...literally found it on Saturday, owned it by Tuesday.

When I came to the top of the stairs and saw that wonderful wall paper -- it was the frosting on the cake!!
Kari